What does COVID-19 have to do with Internet Marketing? We are not witnessing a pandemic, it is a poorly crafted marketing campaign. One that depends on fear and intimidation.

Due Diligence – do your own research. I started this post by simply documenting some facts and material that contradicted the MSM narrative. But those items have been pushed to the bottom of this post while I will attempt to curate ad-hoc.

One of the core methods of creating a marketing campaign is emphasizing the points that sell your product, and omitting or minimizing those points that don’t. Sometimes you will see an attack on logic.

Now the wise person looks for those omissions and attacks in order to cut-through the bullshit that is understood to be present in all marketing campaigns. This is how people make informed decisions when purchasing a product. Of course we all do our best to ascertain a holistic view of both beneficial and detrimental aspects in order to purchase anything. We do it when we buy a car. We watch the commercials (marketing) and then check the details (reviews, specifications, etc.). Its common to say that an electric car is “carbon neutral”, which is actually false, so we say “green”, seemingly the audience accepts this illogic in this case.

I was just as concerned as anyone about SARS-CoV-2 in February 2020. I noticed the entire establishment tried to suppress information about treatments for COVID such as Hydroxychloroquin and Invermectin. The Front Line Doctors who tried to get their message out (because the MSM would not) were demonized. Any person would be interested in a proposed way to address the symptoms of a virus that was “going to kill millions”. It was worthy of serious consideration at a time when there was no vaccine on the horizon. Illogical. An attack on logic.

Interestingly “they” failed to suppress this information entirely but they got their desired official emergency, which then made it “legal” to use an experiential gene therapy (not a vaccine) on a scared population.

The MSM, including authoritative sources such as the Lancet medical journal, doubled-down and featured a report saying Hydroxychloroquin is a dangerous drug! I had personally taken Hydroxychloroquin my entire childhood. Why had I not been told? This was alarm coming from the highly-esteemed Lancet, causing some real cognitive dissonance – yet again, as tell that something was not what it appeared to be.

That report was quickly called out as a fraud. However, the magnitude of the attack was pronounced. It seemed someone was attempting to bury a solution competitor to someone’s previously agreed upon, certainly more profitable, vaccines. I believe that caught the attention of every critical thinker.

As Dr Reiner Fuellmich explains how the fear that pushes people to act irrationally was seeded by the PCR tests that created COVID cases in almost every person tested. Thus they invented the concept of “asymptomatic super-spreaders”. Technically such a thing does not exist in medicine. You cannot be sick without symptoms.

The fake cases took this marketing campaign to a entirely different level. (Notice how the media never reports about mortality, which would not scare anyone). After watching the video, I could just stop right here because I believe Dr Fuellmich does a comprehensive overview of the agenda – which is about destroying the middle-class (the economy) and ultimately about Eugenics (reducing the population of the planet). As he said, “It sounds crazy, but its all out there. That is the agenda that they are following.” You can find it and read all about it.

Obviously lock-downs are damaging to an economy and those costs are surely in the billions by now (not to mention the deaths). Since there were no vaccines on the horizon at the time, I thought, if governments would simply supply Hydroxychloroquin or Invermectin to every citizen, surely that would be less costly, and lower risk, than shutting down every (small) business, and paying people not to work, and killing people while waiting a long time for a vaccine (not on the horizon), would it not? Again, an affront to logic. Someone is selling something.

It becomes more obvious with the non-stop fear-mongering reports of cases-cases-cases that started around February-March 2020. It seems all media, suddenly, in unison, screamed “cases”, and that has not stopped. Cases have nothing to do with mortality (you are afraid of dying, but no one is too afraid of the seasonal flu). Even the alt media of the Internet went cases-crazy, because it gets clicks. This momentum has taken on a life of its own. “whatever bleeds, leads”. Fear-porn. Marketing.

But the Excess Mortality numbers (facts) simply show COVID-19 to be a bad flu season with some twists. That is a fact. Over 70, the obese and diabetics are very much at risk, otherwise it is a normal-bad flu. This is not theory. See all these numbers and charts at the bottom. The flu seasons of the late-50s and early-60’s were far-far worse and yet there were no disruptions – no vaccine hysteria.

Seemingly everyone has forgotten about the Thalidomide Scandal. A drug which took a long time to ascertain the terrible birth defects that resulted.

Now we are moving into the scary part of this COVID Marketing Campaign in which those who have seen the same tells, do the math, realized this is not a pandemic, that the vaccines are not actually vaccines (you can still get COVID). All those with questions are not addressed with logic, but with dogma, – we are “non-believers”, “anti-vaxxers”. We may have gotten every vaccine there is to-date, but if you question this vaccine (that is not a vaccine) you are labeled a “anti-vaxxer”.

Coerced experimentation was well defined in the Geneva Conventions, yet somehow the most important humans right declaration in history thus far just does not apply in this “emergency”. Another assault on logic.

Marketing employs degrees of deception that are acceptable to the audience. Marketing does not work once that threshold has been exceeded. People (not everyone of course) sense when they are being deceived and coerced. This COVID Marketing Campaign has crossed that threshold and now we see a dogma arising to coerce – (coercion is violence). This is a marketing campaign to sell an experimental gene therapy has gone off the rails. But by now your logic will tell you that that was the plan from the very beginning.

… not a misunderstanding or a rational argument over scientific facts. It is a fanatical ideological movement. A global totalitarian movement … re. how Christianity “converted” the pagan world. The Covidian Cult – The Covidian Cult (Part II)

Breaking: It turns out that it was all theater after all. The US CDC is moving the goal-post. The CDC Changes Test Thresholds To Virtually Eliminate New COVID Cases Among Vaxx’d – how predictable. How blatantly corrupt.

October 2020: The CDC has changed the IFR values of Covid-19 into age-specific estimates ( Medium ), yet again indicating this was never a pandemic.

The special session of the WHO’s 34-member executive board on Monday October 5th has (accidentally) confirmed what many experts and studies have been saying for months – the coronavirus is no more deadly or dangerous than seasonal flu.

The global population is roughly 7.8 billion people, if 10% have been infected that is 780 million cases. The global death toll currently attributed to Sars-Cov-2 infections is 1,061,539.

That’s an infection fatality rate of roughly or 0.14%. Right in line with seasonal flu and the predictions of many experts from all around the world.

See the chart at the bottom of this page for some perspective – The seasonal flu Mortality Rate was 0.0015% in 2018.

December 9, 2020: Dr Pierre Kory addresses the US Senate. But you didn’t hear about it.

These charts require a careful inspection to see that the x-axis (time scale) is fixed. The far right of the chart is not the current date. The current date is left of center at the moment. (curious way to present data, no?) 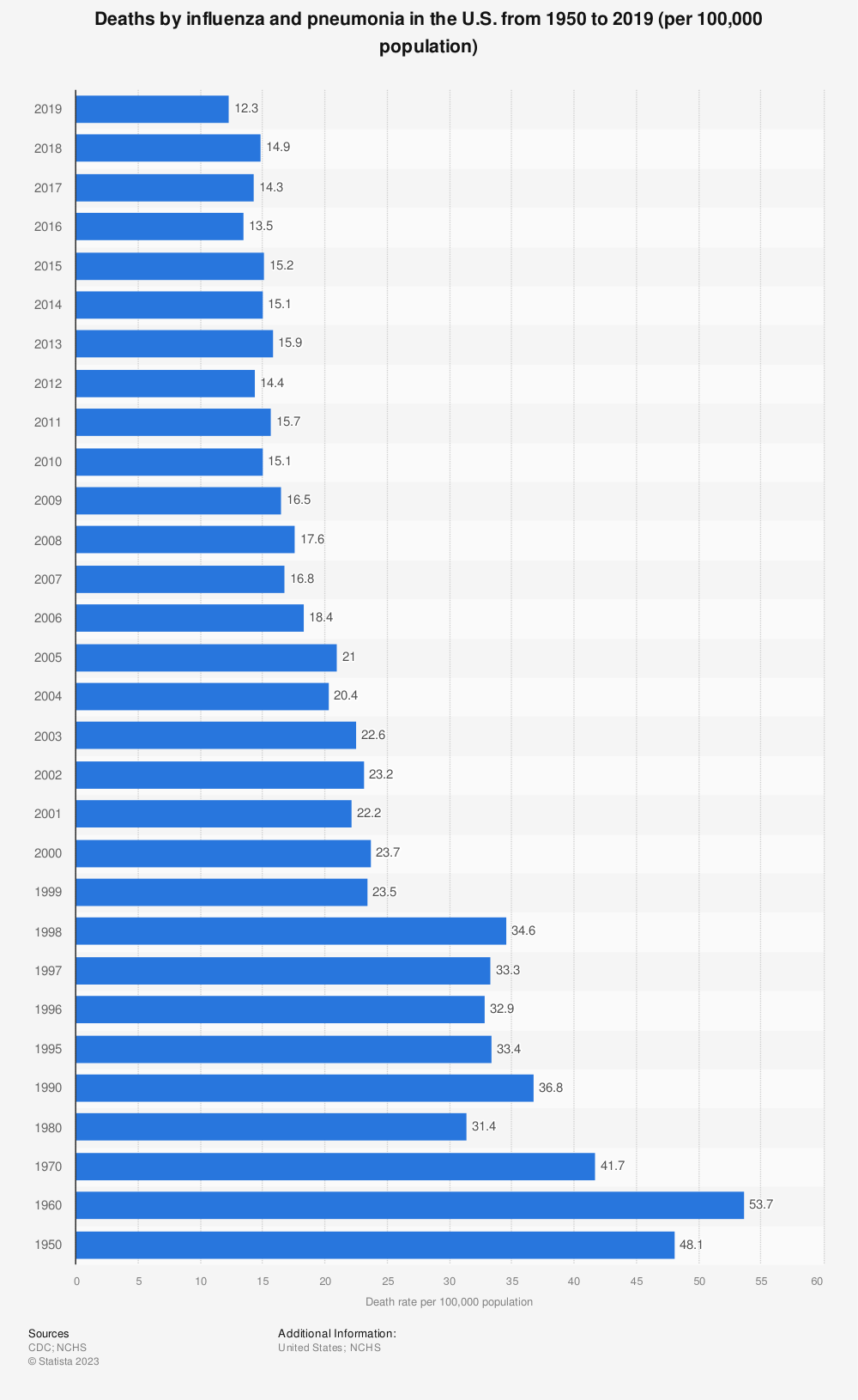